This is a challenging moment for students and young workers in New Jersey. College has never been more crucial to our economy and to job creation than it is today – but college also is more expensive now than ever before.
As a longtime teacher, I have seen firsthand the power of higher education to transform lives, and I want to share with you the steps I am taking in Congress to make college more affordable:
Education is key to the American Dream for individuals – and importantly, it is key to our nation’s economic future. Each of us has a stake in ensuring that the next generation of workers, business leaders, and innovators has access to the opportunities they need to learn, succeed, and create new jobs.
Resources to Make College More Affordable
Recently, I joined officials from Rutgers and the New Jersey Higher Education Student Assistance Authority to talk with local students and parents about college aid opportunities.  Among the resources we shared:
To learn about upcoming college affordability workshops, click here to sign up for my weekly e-newsletter.
I am always happy to help you learn more about college affordability options or to help resolve problems with your student loans. Send a message at holt.house.gov/contact or call 1-87-RUSH-HOLT (1-877-874-4658).

Sincerely,
Rush Holt
Member of Congress
P.S. Just a reminder: I always want to hear from you, but to ensure a prompt response, please don’t reply to this e-mail.  Instead, please visit holt.house.gov/contact or call 1-87-RUSH-HOLT (1-877-874-4658)

In 2020, students may be able to travel to faraway continents, and attend a school on the other side of the globe.
Experts predict technology will facilitate distance learning outside of traditional...

To continue reading this article use the following link:
http://www.facultyrow.com/profiles/blogs/what-higher-education-will-look-like-in-2020-study

or visit www.FacultyRow.com
Posted by Jim Castagnera at 12:09 PM No comments:

U. Va.'s troubles continue: Family of Suicide Sues for $10million 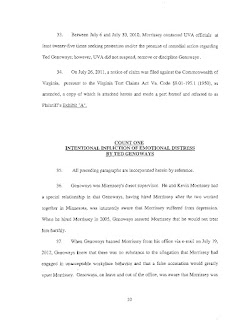 Posted by Jim Castagnera at 12:06 PM No comments:

Brandalism: How far can you carry parody, before you cross the line into copyright infringement?

Is this more than the First Amendment and federal copyright law ought to allow?

http://verdict.justia.com/2012/07/31/digital-parody-and-the-shell-arctic-hoax
Posted by Jim Castagnera at 11:07 AM No comments:

Posted on Monday July 30, 2012 by Staff Writers College campuses are ripe with innovation, as students grow through education and experimentation in school. To help foster this innovation, many colleges and universities have opened business incubators, helping students and others in their community to help make their innovative dreams a reality. Whether they’re offering tricked-out labs or incredible funding opportunities, these incubators offer a great opportunity for students who are smart (and lucky!) enough to participate. Follow along as we explore 10 of the most exciting college business incubators around today, and be sure to share your own favorites in the comments.

Posted by Jim Castagnera at 9:56 AM No comments:

Advice for getting out of debt

14 Inspiring Podcasts for Getting Out of Debt

Getting out of debt is often a journey that takes many months to complete, not just a few moments. Although books and guides are great for getting started, staying on track when getting out of debt requires constant motivation and encouragement, and podcasts are a great medium for just that. Whether you're listening to financial experts, families who have crawled out of the debt hole, or the latest financial news, these podcasts offer regular, interesting insight for those who are working to get out of debt. Subscribe to these 14 inspiring podcasts to find the tools and knowledge you need to get out of debt and stay there.

Posted by Jim Castagnera at 9:53 AM No comments:

Where the One-Percent send their kids to college

Where The 1% Send Their Kids to College

by Staff Writers on July 29, 2012
The 1%. They’re the people on everyone’s lips these days, but if you were to pass one of their ilk on the street, you’d probably never know it. Despite what you may think of them, they don’t walk around with a cane and top hat looking for Grey Poupon. They’re 1.4 million regular folks who just happen to make more than $343,927 a year in adjusted gross income. The vast majority of them who have kids send them to college to ensure they get the best job they can, just like the rest of us.
Of course, the difference is that their range of options for college is practically limitless. The median household income in America is about $51,000, meaning $50,000 in tuition is not going to happen (without significant or full financial aid). But the 1% can afford the finest education for their kids that money can buy, and while these kids can end up anywhere from community colleges to Cornell, certain schools consistently attract the children of the wealthiest Americans. (Because schools don’t publish the incomes of students’ families, we’ve primarily had to go by children of people we know are millionaires: celebrities.)
The Ivy League
Yes, it comes as a surprise to absolutely no one that the rich send their kids to Ivy League schools. Probably parents that do so realize that the quality of the education will be extremely similar to that offered at colleges half the cost, but for connections made and the earning ability that comes with the degree’s prestige, see it as a sound investment. While all the Ivies enjoy high ratios of rich kids, a few consistently attract the heirs of millionaires and even billionaires.
Elsewhere

Posted by Jim Castagnera at 10:42 AM No comments:

While more students than ever choose to head to college after high school, a striking number never complete their education, dropping out years before they obtain their degrees. As a result, student retention has become a major issue for colleges who want to do what they can to stem this tide and help keep students in school until they can complete their studies, an outcome that benefits students and schools alike.
For decades, research has been pointing to social engagement as a key factor in helping improve student retention. While much progress has been made in working toward easing students into the college experience, supporting them, and getting them active with their peers, there’s still much more that can be done, as social engagement can be a pivotal factor in whether a student sticks around to finish his or her studies. Here, we examine some of the research that has been done on the topic and some of the noted effects social engagement has on student retention, highlighting the importance of making students feel safe, happy, and at home no matter what school they choose to attend.

Posted by Jim Castagnera at 10:39 AM No comments: