Some of my early writings on terrorism that you might enjoy

What Is a Hero?
http://www.aahea.org/articles/heroes.htm

How to End the War on Terror
http://psi.praeger.com/doc.aspx?d=/commentary/Castagnera-20081205.xml

America's Homegrown Terrorists of the 21st Century: The Disgruntled, the Obsessed,and the Mad--- Three Types, One Challenge?
http://connection.ebscohost.com/c/articles/47191517/americas-homegrown-terrorists-21st-century-disgruntled-obsessed-mad-three-types-one-challenge
Posted by Jim Castagnera at 2:53 PM No comments:

Check out my newest book and my first MOOC 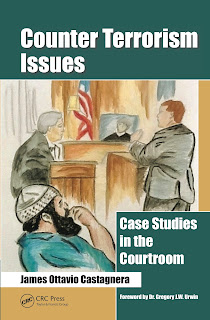 Posted by Jim Castagnera at 8:20 AM No comments:

I'm tired of all this media droning about drone attacks

Isn't this guy exactly the sort our government ought to be eliminating?

Posted by Jim Castagnera at 8:04 AM No comments:

... but can it really rewire your brain?

Actually, now that I think about it, it may very well have rewired my son's brain.  He went back to Germany after graduation, married the girl he'd met while studying in Hamburg, and has never come home again.  Hmmm...

Posted by Jim Castagnera at 7:59 AM No comments:

Immigration: The Border Patrol has introduced an automated I-94

These can be printed off the computer and will be valid.

Posted by Jim Castagnera at 7:53 AM No comments:

Maybe, when lectures are outsourced.

Posted by Jim Castagnera at 4:03 PM No comments:

You might think that a guy who makes 1.5 million bucks a year would know better

Maybe touchdown Jesus will get him.

Posted by Jim Castagnera at 3:58 PM No comments:

This sounds like the plot of a Scott Turow novel

One judge died in a "hunting accident," as the plot thickened.

Posted by Jim Castagnera at 7:49 AM No comments:

The SPIRIT LAKE TRIBE OF INDIANS, by and through its COMMITTEE OF UNDERSTANDING AND RESPECT, and Archie Fool Bear, individually, and as Representative of the more than 1004 Petitioners of the Standing Rock Sioux Tribe, Plaintiffs–Appellants
v.
The NATIONAL COLLEGIATE ATHLETIC ASSOCIATION, Defendant–Appellee.

*1 The Spirit Lake Tribe of Indians, by its Committee of Understanding and Respect, and Archie Fool Bear, individually and as representative of more than 1,004 members of the Standing Rock Sioux Tribe—collectively, “the Committee”—sued the National Collegiate Athletic Association (NCAA) for interfering with the University of North Dakota's use of the Fighting Sioux name, logo, and imagery. The NCAA moved to dismiss. The district court FN1 treated the motion as one for summary judgment and granted it. The Committee appeals. This court affirms.

In 1969, the elders of the Standing Rock tribe, joined by one Spirit Lake elder, ceremonially approved UND's use of the Fighting Sioux name. UND is an NCAA member. In 2005, the NCAA began prohibiting the display of Native American mascots, nicknames, and images at championship events, specifically including UND in the announcement. UND and the North Dakota State Board of Higher Education sued the NCAA, challenging the policy as applied to UND. In 2007, they entered a settlement agreement allowing UND to retain the name without sanctions if the Spirit Lake and Standing Rock tribes granted approval before November 30, 2010. The Spirit Lake Tribe granted approval, but the Standing Rock Tribe never voted on the issue. (In 1992, 1998, and 2005, the Standing Rock Tribe adopted resolutions requesting that UND discontinue use of the Fighting Sioux name.) In 2009, the Board decided to retire the name early.

The Committee (but not Fool Bear) sued to enforce the settlement agreement and to enjoin the nickname's retirement before the deadline. The North Dakota Supreme Court held that the settlement agreement did not preclude the Board's early retirement of the nickname without the consent of the two tribes. Davidson v. N.D. State Bd. of Higher Educ., 781 N.W.2d 72, 78 (N.D.2010). The Committee and Fool Bear then brought this suit, requesting, inter alia, that the court enjoin the NCAA from sanctioning UND for using the Fighting Sioux name and grant non-economic damages of at least $10 million.

Because the Committee submitted matters outside the pleadings, the district court treated the NCAA's motion to dismiss as one for summary judgment. See Fed.R.Civ.P. 12(d). This court reviews a grant of summary judgment de novo. Lieffort v. Dakota, Minn. & E.R. Co., 702 F.3d 1055, 1057 (8th Cir.2013). “Reviewing the record in the light most favorable to the nonmoving party, we will affirm the grant of summary judgment if the movant shows that there is no genuine dispute as to any material fact and the movant is entitled to judgment as a matter of law.” Id. at 1057–58 (internal quotation marks and citation omitted).

The NCAA argues that the Committee lacks standing. “[T]he irreducible constitutional minimum of standing” requires that “the plaintiff must have suffered an injury in fact—an invasion of a legally protected interest which is (a) concrete and particularized, and (b) actual or imminent, not conjectural or hypothetical.” Lujan v. Defenders of Wildlife, 504 U.S. 555, 560 (1992) (internal quotation marks and citations omitted). The Committee and Fool Bear respond that “they have a pecuniary interest in the name ‘Fighting Sioux’ and have benefitted from the name's honorable usage portrayed on a national stage.” They claim that ending its use “would dishonor the sacred ceremony [granting it] and violate their dignity,” additionally asserting injury from “family turmoil, shame, humiliation, persecution, and damage to Sioux youth self-esteem and educational opportunities.”

*2 Emotional harm can be sufficiently concrete and particularized to confer standing. This court found such an injury where members of the Red River Freethinkers organization “suffered feelings of exclusion, discomfort, and anger” from unwanted contact with Fargo's Ten Commandments monument, which the organization claimed continued to stand because of the city's allegedly unlawful conduct. See Red River Freethinkers v. City of Fargo, 679 F.3d 1015, 1023–24 (8th Cir.2012). The legally protected interest in that case was clear: freedom from Establishment Clause violations. Here, the Committee complains of injury from UND's ceasing to use a name because of the policy of an association to which UND voluntarily belongs. Even if the Committee's alleged injury is sufficiently concrete and particularized, it does not result from the invasion of a legally protected interest.

The Committee argues that the NCAA's acts meet the requirements of a prima facie 42 U.S.C. § 1981 discrimination case. Section 1981 protects the rights of citizens belonging to protected classes “to make and enforce contracts,” including “the making, performance, modification, and termination of contracts, and the enjoyment of all benefits, privileges, terms, and conditions of the contractual relationship.” 42 U.S.C. § 1981.


Our court has identified several elements to a claim under § 1981, which we divided into four parts for analysis: (1) membership in a protected class, (2) discriminatory intent on the part of the defendant, (3) engagement in a protected activity, and (4) interference with that activity by the defendant.

“A plaintiff may prove intentional race discrimination using either direct or indirect (circumstantial) evidence.” Putman v. Unity Health Sys., 348 F.3d 732, 734 (8th Cir.2003). “ ‘Discriminatory purpose’ ... implies more than intent as volition or intent as awareness of consequences. It implies that the decision maker ... selected or reaffirmed a particular course of action at least in part ‘because of,’ not merely ‘in spite of,’ its adverse effects upon an identifiable group.” Personnel Adm'r of Mass. v. Feeney, 442 U.S. 256, 279 (1979) (internal citation omitted).

The Committee has not shown that the NCAA acted with discriminatory intent. The NCAA claims to be motivated by the desire to eliminate the use of “hostile and abusive” mascots and imagery, but ultimately agreed to allow UND's use of the Fighting Sioux nickname if the Spirit Lake and Standing Rock tribes approved. The NCAA stated in the settlement agreement that it would not “initiate contact with any Sioux Tribe for the purpose of attempting to persuade any tribal governmental entity to provide or not provide namesake approval to UND.” There is no evidence that the NCAA enacted the policy in order to eradicate Sioux culture, as the Committee alleges.

However meaningful the nickname's grant may have been, there was no contract because there was no indication of mutual intent to create a legal obligation, let alone an obligation sufficiently definite and certain that a court could require its performance. The Tribes were apparently free to withdraw their permission to use the nickname; most importantly, as the Davidson court held, the Board was free to change UND's nickname. See Davidson, 781 N.W.2d at 76–77. Contemporary newspaper articles cited by the Committee suggest a statement of appreciation, not a contract. One explains, “The pow-wow was given in appreciation to the University for the educational opportunities it has given the Sioux Tribe.” Another quotes the coordinator for the Head Start Program on the Standing Rock Tribe reservation as saying, “This is our way of giving thanks for the education opportunity and hospitality the University has extended to the members of our tribe who are participating in the Head Start Career Development Program.” Interpreting the facts most favorably to the Committee, the ceremony was only a statement of appreciation.

The Committee argues that its exclusion from the settlement agreement violated § 1981 because both tribes were indispensable parties to the agreement. Even if that argument is not collaterally estopped by Davidson, it fails because the Committee has not presented a prima facie § 1981 case by showing the NCAA excluded it for racially discriminatory reasons.

*4 The Committee contends that the NCAA violated its own constitution and bylaws in adopting the 2005 policy. Courts generally adhere to the principle of judicial noninterference in decisions of voluntary associations (subject to recognized exceptions). See Crouch v. National Ass'n for Stock Car Auto Racing, Inc., 845 F.2d 397, 400–03 (2d Cir.1988) (courts are more willing to intervene “when they conclude that there are inadequate procedural safeguards to protect members' rights”); Scheire v. International Show Car Ass'n, 717 F.2d 464, 465–66 (9th Cir.1983) (judicial review is appropriate where the association “has plainly contravened its bylaws” and “the burdens on the courts and on the interest of the association in its autonomy do not outweigh the aggrieved member's interests”); Charles O. Finley & Co., Inc. v. Kuhn, 569 F.2d 527, 544 (7th Cir.1978) (exceptions exist “1) where the rules, regulations or judgments of the association are in contravention to the laws of the land or in disregard of the charter or bylaws of the association and 2) where the association has failed to follow the basic rudiments of due process of law”). The facts here support none of these exceptions; the Committee cannot complain of being denied due process by the NCAA because, as a nonmember, it was entitled to none from the NCAA. The NCAA's acts neither violate the laws of the land nor plainly violate its own constitution and bylaws.

The judgment of the district court is affirmed.

Posted by Jim Castagnera at 4:29 PM No comments:

Posted by Jim Castagnera at 4:19 PM No comments:

No surprise: grad employment rates and earnings vary by majors

Here's what the Georgetown U study revealed:

Posted by Jim Castagnera at 9:55 AM No comments:

Decision reaffirms a long-standing rule... and a good one.

Posted by Jim Castagnera at 8:51 AM No comments: